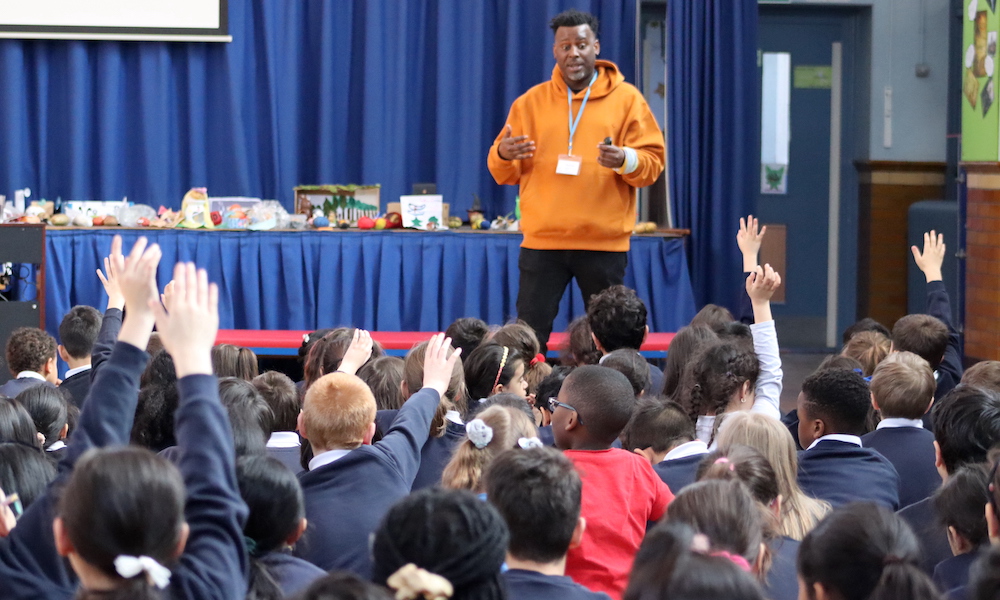 Motivational speaker Stuart Lawrence visited Eastfield Primary School to speak to children about how to make a positive change and use their voice for good.

Stuart’s elder brother, Stephen Lawrence, was killed in an unprovoked racist attack in 1993. Stuart and his family faced a long battle for justice and he now works with young people to inspire them to build a better future.

During his visit, Stuart chatted to pupils in the playground and played some football, before hosting an assembly, where he discussed how to treat others, different types of discrimination and what to do if you experience discrimination.

Pupils from Brimsdown Primary School also attended and had the opportunity to hear from Stuart and ask questions. The event was organised by Eastfield’s Equalities Team, which raises awareness of inequality and promotes conversations among the children.

Ben Statham, Headteacher at Eastfield, explains: “The children were so excited to meet Stuart, particularly as his mum, the campaigner Doreen Lawrence, is one of our school role-models. Stuart’s assembly was so inspiring, and it gave pupils an opportunity to reflect on racism and tolerance.”

Ben adds: “We’d like to thank Stuart for coming in to talk to the children. Afterwards they said they wanted to go home and speak to their parents about what they had learned.”

Eastfield pupil Kimmarah Nelson, aged nine, says: “I had watched a documentary about Stephen Lawrence so I was really excited to have the opportunity to meet Stuart. Stuart talked about how important it is to be kind and to tell an adult if you are bullied. When I get home, I will tell my mum and dad about how all people should be treated the same.”