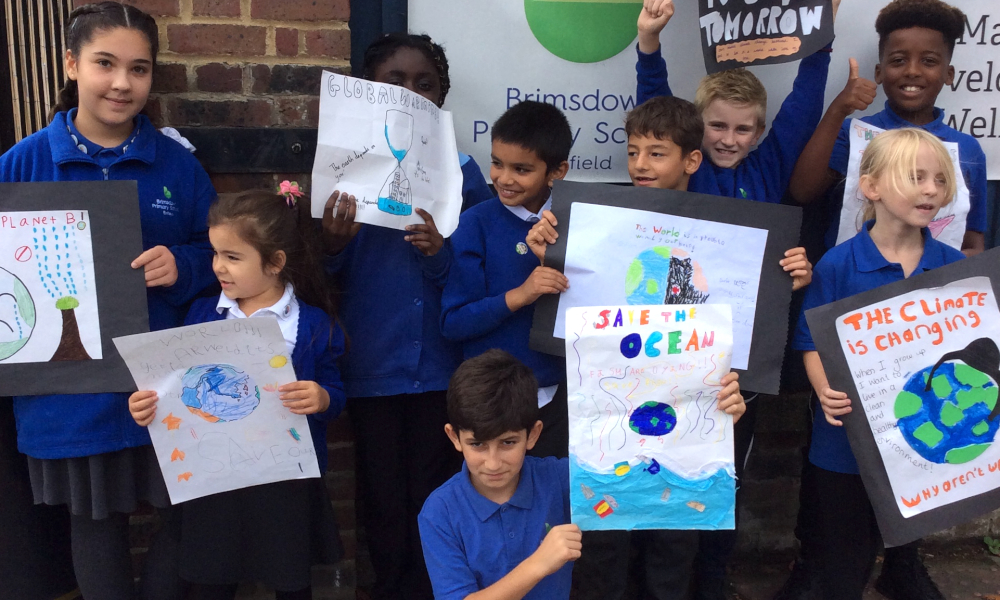 Enfield schoolchildren have joined millions of people around the world to protest against climate change and demand urgent action.

Pupils at Brimsdown Primary School, in Green Street, held a protest outside the school as part of the Global Climate Strike. Children of all ages designed their own posters and sang chants. They had a dedicated assembly and took part in activities throughout the day.

Eleven children from the school featured on the Sky News website to explain why they were worried about climate change. Their concerns included animals becoming extinct, rising sea levels and ice caps melting.

Dani Lang, Headteacher at Brimsdown, said: “It’s important for our children to understand and be involved in the debate around climate change. It’s their world and their future, and they need to be thinking about these things now before it’s too late. The children feel very passionate about making sure they’ve got a better world for the future.”

The school has its Eco-Schools Bronze Award and a designated green team, made up of eight pupils who campaign to improve environmental awareness. The team have worked on a number of eco-friendly activities, including making sure that lights are turned off at school, promoting reuse and recycling and picking up litter in the local community.

Brimsdown is part of the Ivy Learning Trust, a family of six primary schools in north London and Hertfordshire. The Trust’s Ivy Parliament, represented by children from each school, will be focusing on climate change and the environment over the coming year and will be planning activities to tackle this in the local community.

There has been an explosion in the number of young people protesting against climate change, inspired by the Swedish school striker Greta Thunberg. People in 185 countries have been demonstrating, demanding urgent action to tackle global warming.

In July, Enfield Council declared a state of climate emergency and committed to making the authority carbon neutral by 2030 or sooner. They also agreed to set up a Climate Emergency Task Force to see how they can further cut greenhouse emissions.

In September the Task Force announced that primary and secondary school children in Enfield will receive free cycling lessons, as part of a drive to encourage young people to use more sustainable forms of transport.